As discussed in the last post on this topic, the next step  was to increase the oxygen levels in the water to see if this would encourage root development in the stocks.  To achieve this we have simply used an air pump and air stones that are used in fish ponds (see photos below).  This has increased the oxygen levels to above 80% saturation directly above the air stone. 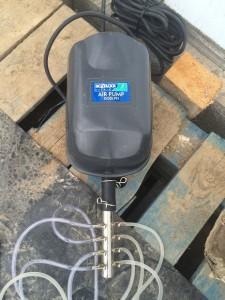 And as a result of the increase in oxygen levels we are seeing a massive difference in both the growth of the plants and the development of the roots.  The rafts that are directly over the air stone quite clearly stand out from the other rafts (see photos below).  Unfortunately this has also increased the algal  deposits but this is a problem for another day. 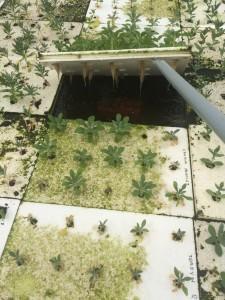 However this positive growth effect  does not spread any further than 2 rafts away from immediate vicinity of the air-stone even though the oxygen levels in this area are still in excess of 60%  saturation (it was less than 20% before we added the air-stone) indicating that stocks require very high levels of oxygen to achieve adequate growth.   The following photos show the foliage and the root growth of the raft immediately above the air-stone. 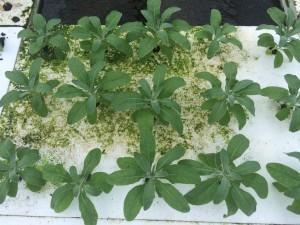 Contrast this with the following photos which show the foliage and root growth (or lack of it) of a raft which is only 2 rafts away from air-stone. 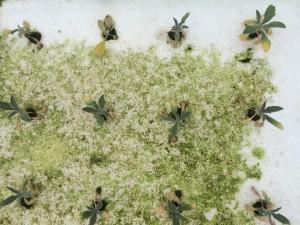 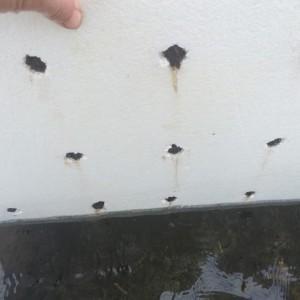 When photographed side by side (photo below) the difference is even more stark.

We have been working with Paul Challinor of May Barn Consultancy especially as regards the development of the initial nutrient recipe and interpretation of the subsequent water analyses.  Judging by the results that we have had with the asters, lettuce, statice, chrysanthemums, lisianthus and hopefully now the stocks, the initial recipe seems to be spot on.  But this may of course need some tweaking once we get the stocks to the flowering stage.

While we have a long way to go before we are able to produce a marketable crop, the latest results are very encouraging and we have installed another air pump which is supplying additional oxygen to a number of newly planted floats which will hopefully be showing positive results by the Open Day on the 5th of August. 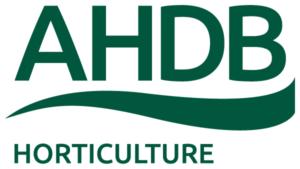